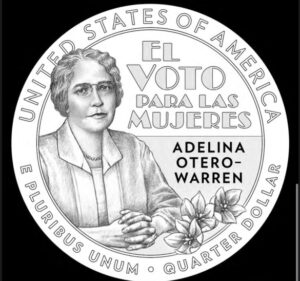 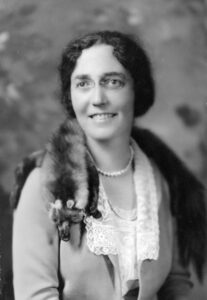 My aunt, Adelina “Nina” Otero Warren, was a role model for women in her time. Born in 1881 in Las Lunas, she was a descendant of prominent Spanish families who arrived in North America in the 16th Century.  Nina’s achievements as an advocate for political and social causes spanned through the 19th and 20th centuries; while New Mexico was an American territory and after NM gained statehood in (1912, and for 53 years beyond). She had Spanish and Native American blood, and brokered relationships in a contentious time. Her accomplishments, which broke many glass-ceilings, were the result of her dauntless courage to stand up for the people and cultures she loved.

The term “advocate” aptly describes Nina’s character. Her greatest strengths were her ability to convince predominantly male power brokers to support changes in favor of New Mexican women, advocate for passage of the 19 Amendment (woman’s right to vote), and advocate for children by challenging the Native American Boarding School standards imposed by the U.S.. She fought for English and Spanish literacy standards in the statewide curriculum, insisting that her Spanish culture not be replaced by ‘newcomers.’

Nina Otero Warren’s achievements as an advocate include:

She  was the oldest daughter of 12 Luna-Otero-Bergere children and pushed for her siblings to be educated and active in community affairs. When her mother, Eloisa Luna Bergere, lost her community law status after the territory became a state, Nina helped her set up a family trust that protected the rights of the single and widowed women in her family to retain their home and land, fighting against state laws that allowed only men to own property.

Nina became the head of the Folklorica Society incorporating artistic activities from the Spanish and Native cultures into events and economic generators for artisanos, dancers and authors. Her own book entitled, “Spain in Our Southwest” was published in 1936.

Nina demonstrated courage, intelligence, self-confidence, and an exceptional ability to influence in order to be an advocate for the just causes for women, children, and native communities.

Nina is loved deeply by her great nieces and nephews and when we gather at her Las Dos homestead, her presence is felt around the old sheepherder’s fireplace. She was a true tri-cultural educator, politician and suffragist ahead of her time and will always be remembered fondly and gratefully by her family.