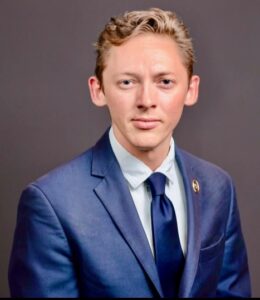 Connor Leavy Murphy, a policy analyst with the City of Santa Fe in the City Attorney’s Office and the Office of Legislation and Policy Innovation, has been named the new president of the Santa Fe County Young Democrats. He assumes the position following the resignation of Kate Kennedy after many years of service.

Murphy previously worked as a field organizer with Mission for Arizona, the Arizona Democratic Party’s coordinated campaign, to re-elect U.S. Sen. Mark Kelly (D-AZ) and other Democrats on the ballot in 2022. Prior to that, he worked as a legal document specialist at RR Donnelley legal services.

Murphy is a lifelong Democrat. “As a person with a disability, the son of an immigrant, and as a member of the LGTBQIA+ community,” he said, “I am inspired by Democrats championing an inclusive future for all.” He hopes to continue the notable work of the previous leadership team to serve as a community partner and create a more equitable and inclusive community.

Santa Fe County Young Democrats (ages 18-34) are seeking a vice chair, secretary, and treasurer. If you or someone you know is enthusiastic about engaging young Democrats to contact .

A 2020 graduate of the Sandra Day O’Connor College of Law at Arizona State University, Murphy earned a master of legal studies (MLS) and was an ASU Achievement Scholar at ASU Law. In the summer following his first year of graduate school, he gained experience in immigration law at a local firm, where he drafted legal memoranda. Subsequently, he served as president of ASU Law’s International Law Society.

Prior to earning his MLS, Murphy worked as a Donald W. Reynolds Fellow with the Carnegie-Knight News21 Initiative, where he reported on the response of local, state, and federal law enforcement to hate crimes across the United States. He received the 2019 Robert F. Kennedy Journalism Award in the college category as a member of News21.

As an undergraduate, he studied political science and journalism with an emphasis on foreign affairs. He completed numerous internships as an undergraduate, including internships with the U.S. Trade Representative and the U.S. Commercial Service. Subsequently, he served as an intern with the U.S. Department of State in Milan, Italy. Murphy then moved to Brussels, Belgium, and completed an editorial internship with POLITICO Europe, where he produced over 80 articles on Transatlantic and European affairs.

He is a dual citizen of the United States and the Republic of Ireland and regularly travels back to his mother’s hometown of Dundalk, Ireland. In his spare time, Murphy plays soccer, is a Lego enthusiast, and enjoys spending time with his dog Saturn.